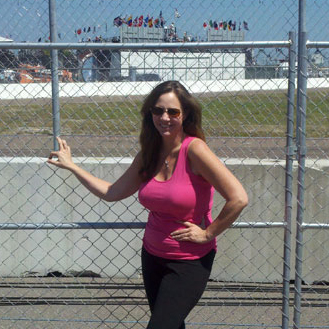 Last month was my first time behind the driver’s seat at the historic Glen; it was without incident. Well I guess that would depend on the definition of the word incident. I arrived a day early just to adjust to my surroundings and impress the track onto my brain. I figured I could use all the help that was available to me. To that end I memorized Brock Yates DVDSpeed Secrets at the Glen to the extent where the jangly theme music reverberated through my brain. Then while kicking around getting hot laps from friends who were already enrolled and driving I realized at lunch hour I could take my own wheels out with the tourist tour. Signed right up! Who cares if it is 55 mph; I was driving my own car!

So I got in line with 6 middle America cars behind the pace car (which was the Glen tow truck). I was last in line and listened carefully to the pace dude’s admonishing: no passing and no hot-dogging (whatever that might be). Where do I sign and let’s get going okay? I think he has to SAY 55mph for insurance purposes, but I do believe he views this job as his bonus and he gunned it, basically breaking our pack in two. The Camry three in front of me just plain lost sight of him. At least that is how I pieced it together in retrospect.

I kept up with the car directly in front of me but the pace truck was nowhere in sight. Still following the car in front of me I thought gee this track doesn’t seem to look like what Brock chatted about. OMG—that was because the Camry decided to take the Nascar route, driving past the wall of cones—all of us following him. I realized his error when I saw him stop up ahead and start to turn around. Okay so I haven’t officially driven the track yet but I do know u-turns are verboten. I screamed as I whaled on my horn, hot doggedly passing the two confused cars in front of me and passed the Camry giving him a wave of follow me, now with me leading the way.

To where? It dawned on me that I really didn’t know where I was going and may just end up hitting another wall of cones. No cones but then I found myself on the front straight with the pace truck in my rear view mirror. I gave him the passing signal and now I got to be right behind him—well that sure worked out well. When we stopped for the touristy picture take on the next lap on the front straight I mentioned to him that it wasn’t my fault we went down the closed track and also gently nudged him with the request for another lap or two since I had been robbed of my initial run of the boot. He looked at me and said, ‘I saw you buying a ticket downtown and I just knew you were trouble.’ Me? I don’t know why people keep saying that to me, but I did squeeze two extra laps out of him.

Next day I was officially on the track with my super official instructor. I felt I had exhausted every avenue of prep available to me; let‘s do it. I am beginning to notice that each new instructor has certain idiosyncrasies of language with their commands. For instance one (who will remain nameless) will say ‘I want you on the floor’ when he really means he wants the throttle to the floor. I just want to say hey you haven’t even bought me dinner, but instead I translate it to the track and say nothing.

Well my new instructor had his own set of commands, my favorite being ‘kiss the white’. His goal was to have me using every possible inch of the track, thus getting ever so close to the white edge rumble strips. He wanted me to be comfortable out there so that if I ever found myself out there by mistake it wouldn’t freak me out. Okay so every time he told me to ‘kiss the white’ it meant just skim the edge of the white. Got it. I got very comfortable kissing the white, so much so that one time towards the end of the day (foreshadowing noted) I was rounding the carousel smoothly and again smoothly aiming for the white. Well I kissed it alright this time. I went up, over and two wheels off the track, taking every advantage possible with the white. While the white was leaning back smoking a cigarette and smiling I was having a very different reaction. My wheels were making quite a bit of noise and I may have been screaming.

You know how when you are in an accident or a near miss you cannot believe the amount of thoughts that can race through your mind in such a short span? Well I was thinking 1) Will I mash the left side? 2) Will I mash the right side? 3) Oh thank God I bought the insurance! There were three ways it could have played out—turned the wheel to the left (bad news), turned the wheel to the right (also bad news) or wheels straight (only way to get out of it mash free). I opted for wheels straight and sailed into the downhill lefthander as if nothing had happened. I probably should note that there is a strong possibility I kept the wheels straight because my instructor was screaming “WHEELS STRAIGHT WHEELS STRAIGHT!”

I can’t be sure though… Maybe I will have to try it again. Or maybe not. So I have decided to just be friends with the white; we are both happier that way. We had our fun and oh what a memory that was.