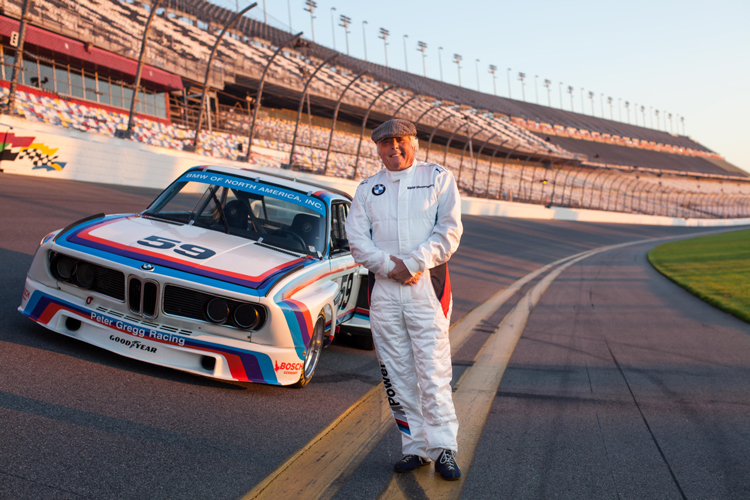 What should have been a truly great Daytona 24 Hours was spoilt by the incredibly bad weather. With famous drivers littered through the field like confetti at a wedding, with cars of proven performance and amazing reliability, this should have been the greatest Daytona 24 ever. Then came the rain. Even so, to see Fernando Alonso demonstrating his uncanny ability in a variety of conditions was a treat for all, as was the performance of all the other greats, especially Alex Zanardi having his first North American race since severing his legs in a terrible 2001 CART accident in Germany. Driving for Bobby Rahal’s BMW Team RRL in a M8 GTE Alex suffered problems with the electrical connection on his special steering wheel. None the less, he drove over 6 hours, proving to himself and to the world that determination and the will to win can accomplish miracles. The other Team RRL BMW M8 won the GTLM class.

I turned professional in March 1967, for the princely sum of $50 a week, guaranteed for a year with a car (F2 Lola T100) and a mechanic. On October 15 of that year I drove David Piper’s 250 LM Ferrari with Richard Attwood to win our class at the Paris 1000 Ks, Montlhery. The race was run in pouring rain, and afterwards David Yorke, team manager for the renowned John Wyer Gulf team approached and asked if I’d like to drive with Jacky Ickx in a Gulf Mirage (actually a modified GT40) at the upcoming Kyalami 9 Hours, near Johannesburg. Would I! We won and I signed a contract with Wyer for 1968. Two weeks later I was signed by the Cooper Car Company to drive F1.

The next race for the Wyer GT40 was the Daytona 24 Hours. Jacky is 8 years younger than me and was widely regarded as a future F1 champion. Known to the outer word as: “The Belgian Wonder Boy” but to myself and teammates Paul Hawkins and David Hobbs as: “The Young Brussels Sprout:”! In those far off days there was no chicane, we came onto the Turn 4 banking at over 190 mph suddenly all you could see was the long-banked curve ahead. Try as I might, every time I hit the banking my right foot gave an involuntary tremor, so after practice I asked Jacky if he was flat onto the banking, he replied: “Yes, but of course Breean……but I sink zat I fly to ze moon.”!  We were on Pole and led until early evening when 2nd gear broke coming out of the Horseshoe.

In ’69 I was part of the massive 5 car Porsche 908 LH onslaught. The previous June I’d suffered a badly broken right forearm when the front suspension broke on my Cooper T86B at the Belgian Grand Prix and I rolled over the barrier and into a corner workers’ post. The arm didn’t heal and had to be operated on again in December, just six weeks before Daytona. As you may imagine, I wasn’t too keen on doing a 24-Hour race! Around seven in the evening the first 908 came into the pits with engine misfiring. The engineers examined it: “Vee are finished, zay vill all break.” And they did, saved by the bell. Later, with my great co-driver Jo Siffert, we went on to win 5 races and the first Manufacturers Championship for Porsche.

In 1970 John Wyer Gulf took over the running of the official Porsche team. Jo Siffert and I were paid by Porsche – $1,000 for Daytona, Le Mans and Sebring and $750 for all other races! – Pedro Rodriguez and Leo Kinnunen by Gulf.  At Daytona our 917 had constant problems, two tire failures, a petrol leak, broken right rear suspension and finally having had enough misuse, the clutch failed. As the stricken 917 was pushed behind the pits, Porsche engineers said the clutch could be changed in one and half hours. Chief mechanic Ermanno Cuoghi assisted by Peter Davies, performed the job in one hour and twenty minutes. In the meantime, I was asked to drive the leading 917. Towards the end of my 36 laps Siffert comes flying past waving like crazy! Somehow, we managed to take 2nd place from the Ferrari 512 of Andretti/Ickx. So, I was 1st and 2nd! Consider this: 76 cars entered the race, 72 practiced, 65 started and 27 finished. The 4th place Ferrari 312P of Sam Posey and Mike Parkes was 77 laps behind the winning 917. In the race were such fire-breathing monsters as: MGB, Morgan + 4, Volvo 122S and Austin-Healey Sprite. The 917’s were lapping the tail-enders on the 4th lap. Talk about closing speeds!

In ’76 we won with the amazing BMW CSL. Co-driver Peter Gregg didn’t feel well and hardly drove, John Fitzpatrick taking his place. The race was shortened by just under 4 hours due to water in the track. I drove for 14 hours and extremely tired, missing the victory dinner at the hotel. Next morning team manager Jochen Neerpasch asked where I was, I replied asleep in the bath until 3 am. “It does not matter, Peter Gregg gave a fantastic speech in German thanking all the mechanics personally, by name” Great. The CSL went on to 5 cylinders around 6 am, driving it to the maximum safe rpm of 9,000, it was still faster than the fastest RSR Porsche. What fun.

In ’81 I introduced the first of the new IMSA GTP prototypes, the Lola T600. The new car wouldn’t be ready until May so for Daytona team owners Ralph Kent Cooke and Roy G.Woods, Jr. bought a Porsche 935 K3/80 from noted west coast preparation shop Garretson Developments, for whom I’d driven several races in the late 1970s with the Dick Barbour team. Along with co-driver Bob Garretson we had keen young driver Bobby Rahal. The car was still being built when it arrived at Daytona, so we had very little practice. I qualified the car in a lowly 16th place with an eager Bobby suggesting he could do better. Early Sunday morning Bobby arrived back in the trailer and when I asked how we were doing he replied that we were in the lead. As I started to remonstrate, he said: “we haven’t passed a single car, they’ve all broken down.”! We went on to win.

My last Daytona 24 of any consequence was 1988 driving with Bob Wollek and Mauro Baldi in Jim Busby’s BF Goodrich great Porsche 962. We lost by 1 lap to the Jaguar XJR-9 fielded by Tom Walkinshaw.

One of the great endurance races in the world, Daytona is also the toughest. Let’s pray for better weather in 2020.