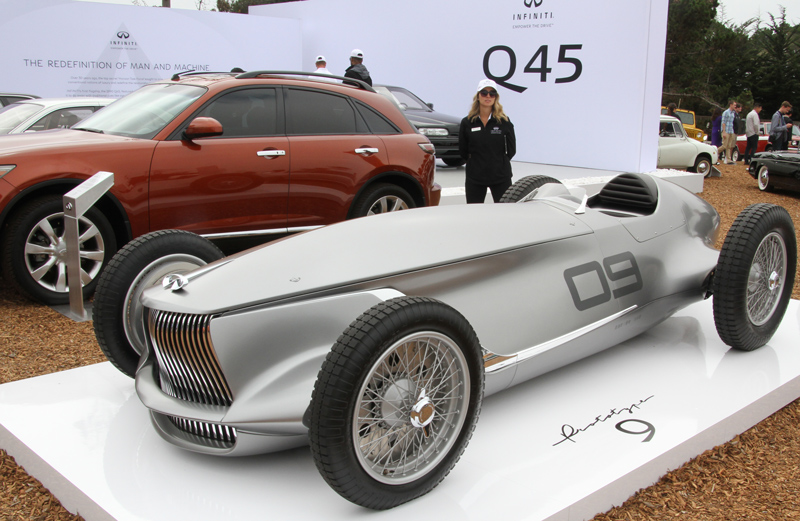 Because the biggest event during Monterey Week is Sunday’s Pebble Beach Concours d’Elegance, Saturday is the busiest day for every other venue. On that day, the Pebble Beach classic touring cars are seemingly everywhere. The vintage racing cars race at Laguna Seca’s have their biggest attendance day. Auctioneers are rubbing their hands in anticipation of the new homes they will shortly own at every oversized parking lot within ten miles of Pebble. Meanwhile, On the Pebble Beach property, on a small wood chip covered lot, the first significant showing of past road and racing Japanese automobiles is on display behind the Infinity Pebble Beach showroom and a quarter mile away from the Gooding Auction.

In an atmosphere where if it is not over-the-top, it is virtually unseen, an understated display of cars that form a significant part of Japanese automotive history whisper for attention. The only vehicles with a connection to America are the racing cars that competed in SCCA and IMSA in their day. MMR friend Tommy Kendall was there as was the Mazda RX7 (Courtesy Tommy and Caroline Kendall) which won the 1982 Malibu Grand Prix and has a rich history of SCCA race wins with the Kendall family. Also present was the 1992 Dan Gurney All American Racers built Toyota Eagle which won the 1992-3 IMSA GTP Championship, and the Peter Brock built BRE Datsun which transformed a boxy little Japanese family car into a boxy fire breathing SCCA dragon slayer that immortalize both Brock and John Morton. And deservedly so. Recommended Reading: Sylvia Wilkinson’s the Stainless Steel Carrot: An Auto Racing Odyssey.

On the domestic side, a brace of Japanese sedans that were never exported from Japan were on display. Some by manufacturers unknown to us but all interesting. Seeing these domestic cars and how different they were from the US racing counterparts that created such a strong impression as a result of their US racing success makes one realize just how much faith they had in Messrs. Brock, Gurney. et al.

Infinity, sedans and prototypes, had a strong presence. I was taken by the display of an early Q45 sedan in basic black. I had a 1990 edition in BRG with tan interior and optional Fittipaldi and it was one of the best cars I ever owned.

Time is the enemy of every event during Monterey Week. We thoroughly enjoyed the effort made by the Japanese industry to bring this display to us and we hope that this is the beginning of their effort to show us a side of our industry with which we are totally unfamiliar.